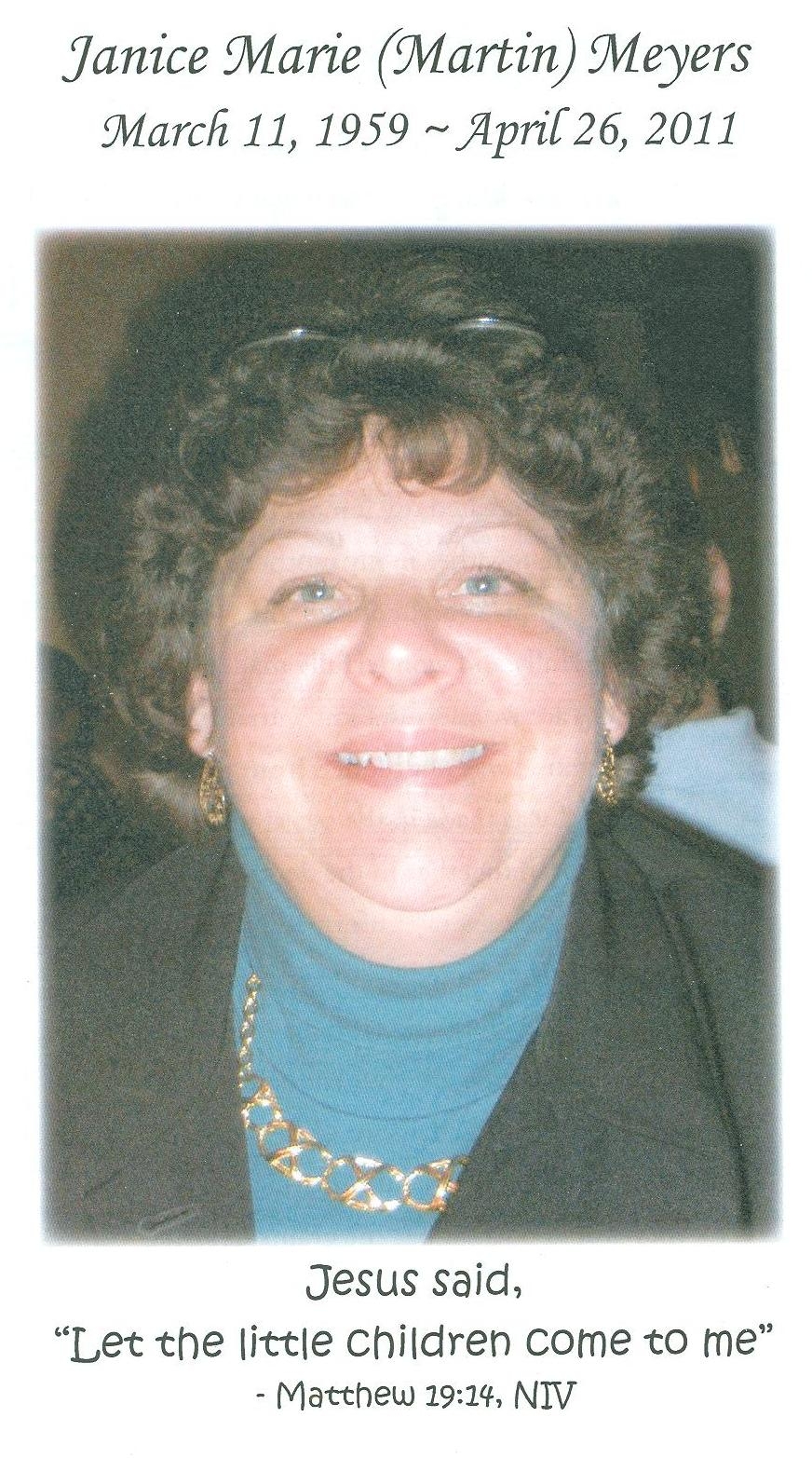 The Janice Martin Meyers Scholarship Fund has been set up for qualifying kindergarten students at Penn View Christian School in memory of an amazing mother, wife, sister, daughter, niece, cousin, friend, and, most of all, teacher. Just as Mrs. Janice Meyers was committed to school, she was also committed to her family. She shared love and laughter as well as understanding and dedication to everyone in her life. Mrs. Meyers was a kindergarten teacher at Penn View for 8 years. Many remember Mrs. Meyers for her kind, caring heart as a teacher. She spent endless hours in her classroom, saying, “My work here is never done.” Mrs. Meyers will always be remembered as having a smile on her face that brightened the halls of Penn View Christian School and her kindergarten classroom every day. She was known for her dedication to her students throughout her teaching career, always going above and beyond what was required of her as a teacher. Janice took pride in her work at Penn View. She thought it was very important to make students feel welcomed, accepted, and appreciated. Her students were welcomed with smiles and tight hugs as she would ask them questions to help them make the transition to kindergarten.

Mrs. Meyers began a five-year battle with breast cancer in 2006. For four years of her battle, Mrs. Meyers continued working since her students gave her strength and encouragement to make it through even the toughest days. She had a deep passion for each of her students and loved teaching. Many of her students still say that she was their favorite teacher. The faculty at Penn View remembers Janice as being a dear friend with a great sense of humor. She had a heart of gold, full of patience and love, as she not only taught but ministered to many young lives in the classroom.

Janice was a true servant of the Lord, using her talents as acts of service. She served in Haiti, San Francisco through Mennonite Voluntary Service, and at Spruce Lake Retreat. She also enjoyed serving for many years as the cook for the middle school Outdoor Classroom. Mrs. Meyers openly displayed her Christian faith during her battle with breast cancer. Through her entire battle, she always relied on her trust and faith in God. She never complained about her pain and kept going through life, determined to win the battle. Mrs. Meyers fought her battle with amazing courage and patient endurance.

Two passages that Mrs. Meyers taught her students were Psalm 23 and Matthew 19:14 “Let the little children come to me.” Matthew 19:14 is a verse that many people remember Mrs. Meyers repeating to herself. The memories of Mrs. Meyers will forever be in our hearts. We can be assured that Mrs. Meyers has made it to heaven because an hour after her death on April 26, 2011, a smile appeared on her face. After all her suffering and pain, she made it to see our Lord and Savior. She received the greatest gift in life, which is entering heaven, our real home. Now, we have Mrs. Meyers/Janice as our guardian angel looking down on us smiling and laughing.